Excerpt from The Emergence

Excerpt from The Emergence by Howard A. Cooper

Excerpt from The Emergence

By Howard A. Cooper

Excerpt from
The Emergence

by Howard A. Cooper

In 2015, I retired after more than forty years as a senior financial and operations executive. Not being one to go fishing, I started to put together some material on a book concept about the potential that exists in all of us. I had worked for and with several companies over the years to help them prosper and grow in productive ways. I always tried to create an environment in which integrity and the growth and morale of the employees were integral parts of the company culture. In the early part of 2016—I am not exactly sure of the date—I received the impression that there was a wave of some type headed toward Earth. I have had several experiences in my lifetime with mystical events, so I did not react negatively to this experience. I saw it as an enormous wave of what appeared to be energy of some sort. I made a rough sketch of what I saw and put it away.

About a month after that, I saw the same wave, only this time, it appeared larger; it seemed to be much larger than Earth. I made some rudimentary sketches as it appeared to me in relation to Earth. Because I did not have a clue what this meant, I put the drawings in a folder.

In the early part of December, I was half asleep at about three o’clock in the morning, when I suddenly heard the words “Leo and Cygnus.” I was immediately wide awake. What the heck are Leo and Cygnus? I thought. Then I remembered both were constellations. Although I have had a few psychic experiences, hearing a message in the middle of the night was not something I had experienced before. After about an hour of thinking about what I had heard, I finally fell back to sleep.

That morning, I went to the few books I have on the constellations and looked up both Leo and Cygnus. I am not that knowledgeable about astronomy or astrology, and I did not understand or see a connection between the two constellations. I certainly did not understand what I was to do with what I had heard. I should also mention that when this happened, I did not connect what I heard with the impressions I had received several months prior. I did some research on both constellations and could not find any direct connection between them. We were getting ready for the holidays and did not have a clue why I’d heard the names of the two constellations. My instincts told me something was about to happen. As the holidays approached, I suddenly had the sense that there was a gigantic wave headed toward our solar system. I checked several scientific websites and could not find anything about this wave. I checked several metaphysical and spiritual websites and found nothing. I could not understand why no one was talking about this event.

I don’t remember the exact moment, but it suddenly seemed as if something like a starburst or act of energy had taken place somewhere in the constellation of Cygnus. I could feel the intensity of it, but I was not sure of its power. I was sure this was why I had heard “Leo and Cygnus,” but why was I getting this information? I did not understand. I woke up one morning with the sudden realization that the impact of the energy wave was going to be experienced by Earth and our solar system beginning on December 22, 2016, and because of its magnitude, it would last through December 28. It seemed to me to be like a new star in the sky, and it reminded me of the story related to the star of Bethlehem, since it was taking place over the Christmas holiday.

I felt that I had to write about what was taking place. I started to write about it, and without having a complete understanding of what was taking place, I called the event the Reveal Transit because of the impact I felt it would have on us. I based this on my initial impressions of what was about to take place. As I was writing my initial thoughts, it became apparent that I needed to address each day of the event differently. I wrote eight steps, or exercises, that I felt we should do through the course of the event, and I called them the Seven Days of Transitional Awareness. The additional step took place on Christmas Eve…

What I received prior to and during the course of the event indicated that this would have a significant impact on the planet Earth, the moon, and our sun. The effect would be experienced throughout our solar system and beyond. My vision and experience were to focus on our sun, the moon, and Earth. I received the knowledge that it was a singular event, something that had never been experienced in our solar system before. The constellation of Leo was involved but on a different level than Earth.

What I realized was that this event would be part of an evolutionary process that we as human beings were going to go through. My sense was that no one would be excluded from this process. The energetic impact seemed to center upon our beliefs and our acceptance of the beliefs that we currently held about this planet and our place on it. The way I described it at the time was that it was similar to an x-ray of a body, in which you see just the bones and an outline. But this was an illumination of our thoughts and beliefs. This is what I wrote in The Reveal Transit.

The impact of this radiance would reveal certain facts about our beliefs in self and in one another. It would be like seeing an x-ray of oneself, only it would reveal the contents of one’s beliefs and not the physical nature of the self.

I saw it as a chance for us to look at how we functioned in the world and with one another. Since that time, I have tried to gain a greater understanding as to what took place. In doing so, it has come to me that this is a chance to provide some clarity regarding the change that is taking place in the course of humankind’s destiny.

Receive a complimentary copy of Howard A. Cooper's introduction to The Emergence: A Time of Accelerated Change when you register to receive our official emails. Welcome to The Emergence!
Subscribe 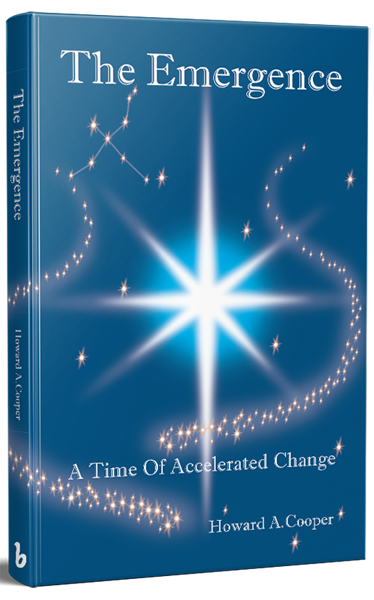 "Every now and then a book is presented that puts an entire lifetime into an authentic, spiritual perspective. The Emergence emphasizes our power as a Citizen of the Universe. If this book has crossed your path, you are ready for the lesson(s) presented..."

"I came across this book in a local bookstore and I am glad I did. This book really hit home with a lot of things I feel. The author does such a great job by helping you understand complex issues while making it exciting and fun. It's a page turner for sure. I would recommend this book to anyone looking for the big answers out there."

The Official Site of The Emergence by Howard A. Cooper